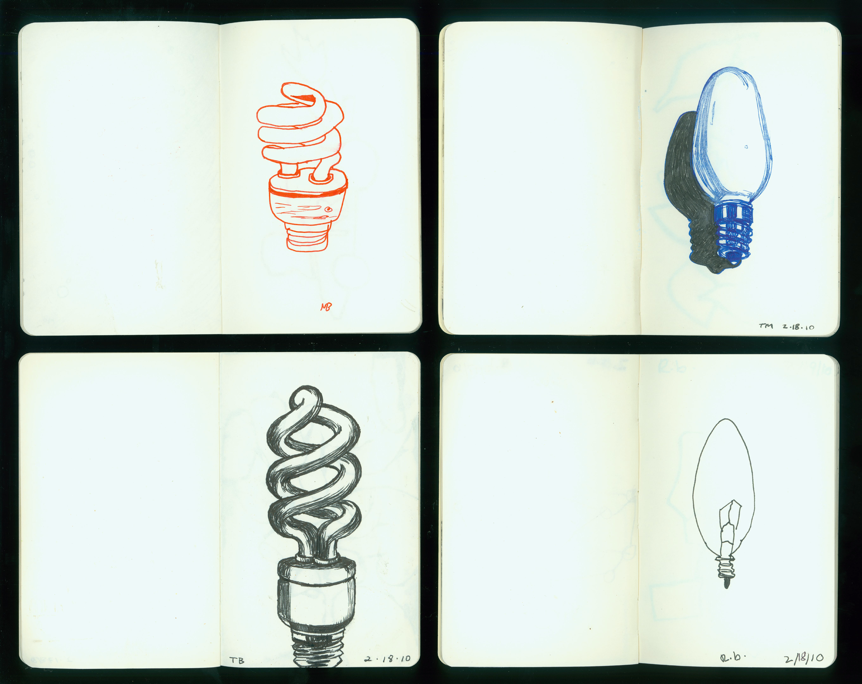 ONE BOSTON FAMILY DRAWS TOGETHER FOR A YEAR

Kiera Coffee: You are both visual artists and art educators. Tell me about the project you did with your children Noah and Roma, in 2010.

Talin Megherian: Our friend Michael Oatman was visiting us. He said, ‘You should make a piece of art, each of you, every single day, for one year.’ At this point Roma was ten and Noah was fifteen. I think we sort of thought that was a cool idea but I didn’t know if we would do it.

KC: But the four of you actually made an artwork together, everyday for a year! It seems impossible.

Talin: Noah was a prolific artist and just drew, drew, drew all the time. Roma, it was in there…

Todd Bartel: …Roma liked drawing but there were times when she just wanted to do something else. But whenever we got into the drawing, there was laughter and play.

KC: Did you draw at the same time every day?
Talin: No, it depended on what was going on. Obviously on school days it happened in the evening. Weekends; it could happen at any time. Also there were times when we went away.

KC: What happened then?

Talin: You would take your sketchbook with you.

Todd: And we typically reverted to drawing something everybody could find – I think the toothbrush drawings came because I was away from home.

KC: The four of you agreed on specifics, so at the end of a day you had four drawings of a vase, four playdoh drawings.

Talin: Yes. We drew bugs on pita chips. We drew with sparklers and caught the drawings in motion (Todd photographed us).

Todd: Someone would say, ‘Draw a toothbrush. Draw a light bulb.’

KC:  Do you remember the first drawing?

Todd: One of the first ones was just amazing. It was the butter one; someone came up with the idea to draw into butter.

Talin: That was my idea.

Todd: Then I had the idea to put chocolate sauce into the crevices.

KC: Did you have a system for who decided what?

KC: What was the surface for the butter?

Todd: It was the butter.

Talin:  We scratched into the butter. And then filled the crevices with chocolate sauce so you could see the drawing.

KC: The kids must have loved that. It is art and it’s also making a bit of a mess.

Talin: Yes. We made quite a few messes.

Todd: There was a day that Talin’s mom was coming to visit so I was scrubbing the bathtub with Comet and I called out, ‘Whoa whoa whoa, everyone come make a drawing!’ The cleanser was swished around as an abstract gesture.

Talin: Or making pretzels on the kitchen table and spreading the flour all over and drawing into the flour.

KC: Which probably made it more doable, as a family.

Talin: That one got a lot of giggles.

Todd: It was so fun the kids asked to do it more than once.

KC: Did you spend a lot of time on each project?

Talin: Sometimes it was as simple as drawing in the dust, it didn’t take a lot of time.

Todd: Some drawings took a half hour, one or two took over an hour, depending on the person making the drawing.

KC: When the year was done was everyone ready to stop?

Todd: There was no, I’m so glad that’s over kind of a thing.

KC: Do you think non-artists could do a project like this?

Talin: I think non-artists have an idea in their minds of what drawing is but seeing our project might open up that thinking. ‘Oh, you mean I can press an object against my arm and make an imprint, and that imprint can be a drawing?’ I see it with my students; you know, they just have to be opened up to it.

Todd: Art is not just about skill, art is about—or drawing in particular—is a connection between the eye, the mind, and spontaneous thoughts and feelings that come up.

KC: You played a kind of rock, paper, scissors game, to see who came up with ideas, and you called it Draw, Erase, Cut, Glue.

Todd: We knew we would have to make a lot of decisions. We rotated by age, who chose the material we drew on (or with). Then whoever won the hand gesture game (like rock paper scissors) chose the activity. We had four people so I needed to have four gestures. I altered rock paper scissors, so the rock gesture became erase. And the paper gesture became glue. Draw was the gesture of holding a pencil. And scissors stayed scissors.

KC: Were there ever moments of frustration?

Todd: I think for Roma it was the time thing, you know, ‘Do I have to do this now?’ She was pretty young. But we have never forced art on our kids. We did things and they saw our passion around it. When I was teaching, I had artist parents lamenting that their kids didn’t want to be creative. From what I could tell, it seemed to be about the pressure put on the kids to do these things. Talin and I wanted to leave it open so our kids could move toward it, or away from it, on their own. I often think about drawing in the same way I thought about playing, as a kid – we had these incredible rules, you know you had the Do Over. Or you had the No Way rule, which was a particular favorite of mine—you know, ‘Wait, wait, wait, I get a second chance because that was just, that was interference!’ We came up with these little rules, and I think if you approach drawing that way; that it’s all an experiment, that it’s all about curiosity and the Do Over, then I think drawing opens up.

KC: I remember you all drew cars on a window one time.

Todd: We were snowed in that day. The idea was to trace the car on the street with tinsel from the tree. Tape was used to hold it in place.

Talin: I really love those.

Todd: I love how everyone traced the same car but worked at their own height and at different locations on the window. 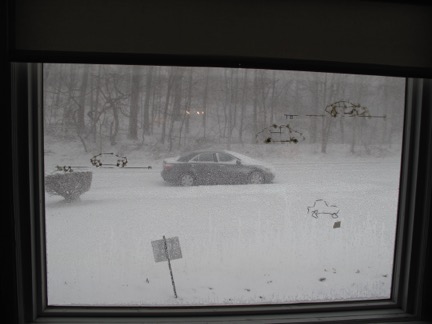 Todd: When you get these prompts for a drawing, instantly you have grandiose ideas. But ultimately you have to let those go and choose something achievable in the moment. And it’s in that act of letting go that the joy, and the play, and the discovery come. I think drawing is about critical thinking but also being truly playful.

KC: It seems like there are life skills in this project, not just art skills.

Talin: I love that about it. It changes how you see things. I still see that in the kids.

KC: Do you miss the project?

Todd: I find myself still thinking of things to do.